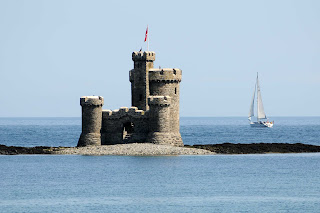 Just off shore of Douglas, in Douglas Bay, is Conister Rock, a small reef which is just covered at high tide.  On top of Conister Rock is the Tower of Refuge, a little fairy-tale castle built at the behest of William Hillary.

The problem with Conister Rock is that it's very near Douglas Harbour, and was a constant danger to pilots and skippers who didn't know the coast.  Even if they did, adverse storms could still blow sailing ships onto the rock.  Hillary's house, Fort Anne, overlooked the harbour and he got fed up with watching boats wreck and people drown from his drawing room windows.  He decided to do something about it.  He founded the RNLI.

That didn't solve the problem of Conister Rock though.  It was still there and still a danger to shipping.  Hillary arranged for the Tower of Refuge - it's said to have got its name from a poem by Wordsworth - to act as both a sign of the rock's position and a refuge for those who ignore the sign.  In its early days it was kept stocked with basic food and water, until those stranded could be rescued.

And what has all this got to do with Loaghtan Books?  Not a lot really, but both Conister Rock and William Hillary feature in a book we're publishing in the autumn.

P.S.  What's a flea's favourite book?  The Itch Hiker's Guide to the Galaxy, of course. 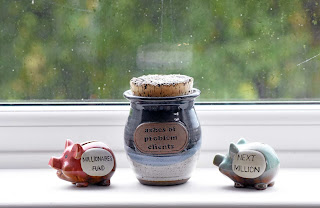 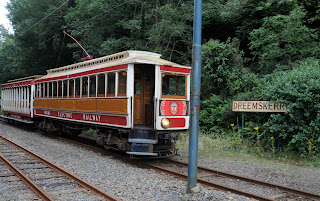